It stands blended into the natural world around it, sunk in spots where loamy earth gave way over years of erosion, its back wall gone with little trace, reabsorbed. A family of turkey vultures resides in its upper loft, gathering old straw to make nests for babies that appear, year after year. We can’t know how long they’ve been here. For us it is always; as long as we’ve owned this farm. 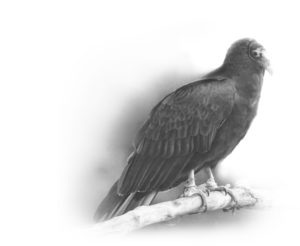 From my chair I found outside town, I sit, watching them come and go. They step out through an opening overhung with ivy and leaning grey boards that should disintegrate but don’t, and take flight. They soar, and for a moment that is eternity, I wish I was with them. I wish I was them.

Nearby, my dad’s old tractor sits like a sentinel, watching over farm, fields, and resident turkey vultures. We’ll not kick these squatters out; as duly appointed caretakers, we’ll keep this house from falling, reinforce it in places invisible so it keeps its pride secure. I know that I would not like to see it other than it is. It has its place here, just as the tractor has its place. There’s a permanency about this farm; those hay bales and milk carts; that roll of carpet, recently beaten to remove the allergens from my dad’s German shepherd before my husband’s visit; even these things seem permanently placed just so.

In the garden there’s a volunteer pumpkin patch, sprouted proudly from our compost heap as if to say, “We are not garbage, look.” Everything here returns to our natural world more beautifully than anywhere else I’ve ever been. In the city, pumpkins lose their lives before they’ve begun. We name them Jack; carve them into masks with false smiles. “This is not what I was meant to be,” they sigh as they disintegrate at the curb, having left no mark on this world. I understand their plight. City life is indistinct.

At the farm, turkey vultures soar in wind and sky, and in that place between inhale and exhale, time stops just long enough to reveal the beauty that exists around me. The surrounding forests have thrived forever, growing only very slowly and becoming majestic in this peace and calm that they inhabit, and that I can inhabit with them if I choose. This place is a gift. In the city, I let years pass in seconds, details forgotten, but here, I come alive with trilliums that carpet forest floors and with the sweet smells of hay and sunshine that drift under vast blue skies.

A tiny caterpillar in that furrow just plowed commands an infinite knowledge that surrounds me, and holds me still.

Kat McNichol is the Co-Editor for the Journal of Integrated Studies and the Editor-in-Chief of Dreamers Creative Writing. She is also a Director of Marketing-Communications in Waterloo and has spent the past 12+ years writing marketing copy for the high-tech industry. She holds a B.A. in English Literature, and an MAIS in Writing and New Media, and Literary Studies.

Read more poetry on Dreamers Creative Writing. Do you like flash fiction? Read The Librarian.

**This prose poem was originally published by Riverfeet Press in the print anthology Awake in the World. This anthology includes poems (including this prose poem), and short stories on the theme of nature and the natural world.