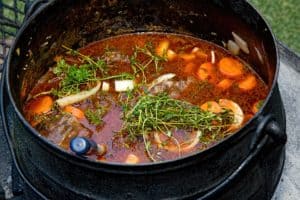 I’ve been making soup for my doctors. I’m proud of myself. It takes energy and I seem to finally have the energy to do it. Since I only see them once every two to three weeks, I have been making as much as I can every day and then adding it to the tractor trailer sized Tupperware container I keep in my backyard.

Yesterday I had an appointment, so my husband rented a trailer cab, hooked it up to the soup and we climbed in and drove the three hours to get there. Outside the hospital, I slid out of the high passenger seat, filled up a bowl with soup and rode the elevator up to the doctors.

I filled out the same form I always fill out with the bowl of soup balancing on my knee. When I was called into the examining room, I walked evenly with soft feet and no sway and managed to keep most of the soup from sloshing out. I sat on the exam table and waited happily with the warm bowl on my lap.

There was a quick double rap on the door and before I could say “come in,” they were all standing in a semi-circle around me, looking critically at the bowl. “Taste it!” I said. They simultaneously adjusted their glasses, pursed their lips and sniffed it.

The surgeon furthest to my left and closest to the room’s slick counter and medical cabinetry, turned her back to us, opened the medical pantry and twirled the lazy Susan around several times before selecting a small cylindrical item that looked like a baking powder tin. She opened the drawer in front of her, took out a set of clattering measuring spoons, and selected the half-teaspoon. She put it in the can, leveled it off on the metal half circle top and tapped it into my bowl.

“I brought it for you,” I mumbled in disbelief. 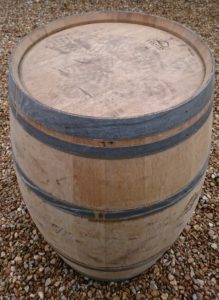 I called my husband and asked him to bring up some more soup. He filled up a barrel and a few minutes later, rolled it into the room. I cracked open the wooden lid and watched the carrots and potatoes bob up and down. A different doctor scooted over and before I could react, tipped a half-teaspoon of shit into the barrel and gave it a good stir with an IV pole.

My husband borrowed a giant copper kettle from the brewery down the block and pumped it full of soup with a fire hose. He hired a crane to raise it up to the level of the exam room windows and the operator swung it back and forth until it crashed through the glass window and into the room. During the commotion, a nurse slipped over, and sprinkled in that half-teaspoon of shit. This time I pretended not to see her so I could have a minute to think. As I thought, I watched her rummage around the cabinets, looking for a bowl. She ladled some out and handed it to me. It was still hot.

I stood there looking at it. Is it ruined? Should I eat it? It still looks like soup. But then I remembered, this soup is not for me.

I yanked the stupid eye chart off the wall and finally tried to strangle the nurse with the blood pressure cuff. At that point they restrained me and I heard someone talking on a phone in hushed tones with the psych ward. They handed me a Xanax to calm down. I tried to swallow it but my aching throat couldn’t get it down. Someone gave me a glass of water to sip. It helped my throat and I felt a bit better. I gazed out the shattered glass window at the giant blue water tower sitting placidly on the hospital grounds.

When I found out last year that I was BRCA2 positive, I didn’t hesitate. I made an appointment at a leading hospital and began a series of prophylactic and reconstructive surgeries that I’ve yet to complete. During the first of the three I’ve had so far, my doctors discovered serious pre-cancer in one fallopian tube. I was told it would have turned into ovarian cancer within days to weeks. The pathology on my breast tissue wasn’t great either. I had widespread precancerous areas.

So, the hospital’s many arms reached deep into my body and took out the organs that were out to get me. It scraped my breasts off of my ribcage. It saved my life. And by doing so, it made me a patient. A patient is an object who was once a person until the purest parts of her are handled, labelled or discarded. With the ‘cure’ she is simultaneously made foul, tainted, marked– especially if she has a genetic condition.

For each appointment I have at the hospital I take my body as an offering. A medical sacrament. But while I see all my cracks filling in with gold, they see opportunity. Have some new toxic information. Thank us. Consider yourself lucky. You’re a good candidate for new procedures. I must just accept– or rebel. Who has the energy to rebel? Who can even remember what they said the last time? They continue to pollute me with their labels, actions, surgeries, pills, expectations, and most importantly, their interpretation of my experience.

Thus, I have become the forever patient. Ticker-tape DNA, all gibberish, unspooling maniacally from every single cell. Monitored, studied. Medicated. Subject to the cold compassion of the shiny metallic medical automatons who can somehow touch every part of me even though I’m nothing but a ghost. 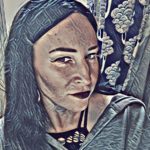 About the Author – Carla Myers

With an undergraduate degree in sculpture and a J.D., Carla Myers followed the most logical path to becoming a writer. This year she retained a significant number of body parts, but not as many as she had hoped. Carla Myers recently won the flash-fiction writing contest at The Gateway Review with a story about killing off some of her ancestors. She is the winner of the Columbia Journal Evolve Special Issue and her work has been published in The Jabberwock Review, Patheos, Muse/ A Journal, Streetlight, Convivium and Sonic Boom.

No Pain, No Gain
What it Mean(s)(t) to be a Doctor
The Space I Take
Incomplete Woman
Mother Poems