Creative-relational inquiry is qualitative research that is also creative and relational. 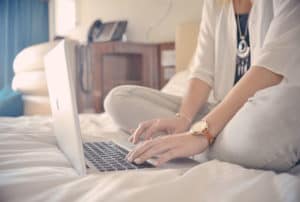 It sounds simple, but it took me a long time to find it.

I began my MAIS program at Athabasca University in 2009, starting with the “Research Methods” course. Originally, I planned to pursue a dual focus in “Work, Organization and Leadership” and in “Global Change”. I’d anticipated completing a final project focused on marketing in a globalized world. I chose these focus areas because as a marketing professional I felt some responsibility to do a project based on my job. By the end of my first course, I knew I wasn’t really interested in those subjects anymore.

At the same time that I was reassessing my academic direction, I was rediscovering my love of reading and writing. I joined the book club at work and read books like The Bone Cage, Bell Canto, and The Glass Castle. After reading The Glass Castle, I wrote my own creative non-fiction piece called “Sisters Lost”. Although I write for a living, marketing writing is not especially heartfelt. Writing “Sisters Lost” caused me to seek out a different degree focus more suited to writing emotionally.

I switched my area of focus to Writing and New Media. It was the right choice. I was able to quickly complete the “Writing the Self” and “Narrative Possibilities” courses because I fell in love with therapeutic writing and with the “transformation through writing model” (Lengelle and Meijers). Then I took the “Autobiographical Analysis” course and discovered autoethnography and autobiographical literary criticism and I was hooked.

After completing “Autobiographical Analysis,” I applied for a dual-degree focus and added “Literary Studies” to my degree program.

I have an undergraduate degree in English Literature so I have a core foundation to support the MAIS “Literary Studies” area of focus. I also have a deep and abiding love of literature. Autobiography, also known as life writing, memoir and creative non-fiction, has always been my preferred literary genre, both to read and to write. I find it personal, vulnerable and intimate. I’ve now learned that the same can be said of autobiographical literary criticism, described in The Intimate Critic as the “female mode” of literary criticism, which “may appear open-ended, generative, and process-oriented” and which blurs the boundaries between the author, the self and the subject under analysis (Freedman, Frey and Zauhar 2). It’s a form of literary criticism that “question[s] the importance of the objective and impersonal” (Freedman, Frey and Zauhar 2).

Similarly, autoethnography also embraces the subjective, incorporating our personal experiences and even our personal biases into our research. Autoethnography, defined as “an approach to research and writing that seeks to describe and systematically analyze (graphy) personal experience (auto) in order to understand cultural experience (ethno)” (Ellis, Adams and Bochner 1), is my preferred research methodology. I like it for the same reasons that I like autobiography and autobiographical literary criticism; it’s a personal, vulnerable and intimate form of creative-relational inquiry that focuses on research involving the self and lived experience, rather than hiding behind cold objectivity.

My two chosen areas of focus mesh together in a way that I find entirely natural. In the past, I’ve often felt like I didn’t fit based on the how my interests crossed disciplinary lines. I think I originally gravitated to English Literature because of the diversity that exists across literary genres. Ultimately, it was the interdisciplinary foundation of the MAIS program that led to my discovery of autobiographical literary criticism and autoethnography, both of which are interdisciplinary methods. Freedman, Frey and Zauhar write, “Autobiographical literary criticism occurs in the intersections of feminism, poststructuralism, black and ethnic literary theories, composition theory, reader-response theory, and poetry” (10).

Autoethnography exists between and beyond multiple disciplines, integrating elements of the humanities and social sciences with the creative and relational (i.e. Creative-Relational Inquiry). Muncey states, “Autoethnography, as method, attempts to disrupt the binary of science and art. Autoethnographers believe research can be rigorous, theoretical, and analytical and emotional, therapeutic, and inclusive of personal and social phenomena” (11). It was autoethnography that provided me with true insight into what interdisciplinarity really meant. Although I’d understood in theory that it involved “the transfer of methods from one discipline to another” (Nicolescu 2), I’d had trouble focusing on more than one discipline at a time. I wanted clear rules for what an interdisciplinary paper should look like and I struggled with what I perceived to be a lack of structure in interdisciplinary studies. At the same time, I also resisted the emotionless detachment of many traditional disciplines.

It was in Athabasca’s “Writing the Self” class that I first encountered academic papers filled with emotion, including Arthur Bochner’s paper, “It’s about Time: Narrative and the Divided Self.” Then, during the “Autobiographical Analysis” course, I was introduced to the work of Carolyn Ellis, one of the founders of autoethnography. Her paper, “There Are Survivors: Telling a Story of Sudden Death,” was inspirational, but more importantly, it was freeing. I devoured the emotional academic writing of Bochner and Ellis. I saw that an academic paper could combine the creative and analytic and that I could write both story and theory in one. This was eye-opening. I felt like I’d found my home, the place where I could exist in academia and still be myself.

As soon as I recognized the connections that could be made between theory and art within research, the lack of structure I had originally struggled with in interdisciplinary studies became something I embraced.

Many questions have arisen for me as a result of my studies in the MAIS program but I’m especially interested in how therapeutic writing can be used to restory lived experience in order to regain a healthy sense of self-identity following a life-changing boundary experience (Lengelle and Meijers 57-58). In my future research, I will explore how writing can be used to restory career identity. My interest arose when I used writing to restory my own career identity during Reinekke Lengelle’s “Writing the Self” class. As a result of these questions, I am beginning a PhD in Career Writing in January 2018. This PhD program is also interdisciplinary, combining human resources with theories of writing, and using autoethnography as the research methodology.

Creative-Relational Inquiry as an Academic Calling

Ultimately, as a result of my interdisciplinary studies at Athabasca University, I’ve found my calling within academia. As I move on to PhD studies, I hope to continue exploring the intersection between humanities and social science, and what this space might reveal about who I am and more broadly, who we all are. Most importantly, in all of my future research, I will continue to embrace subjectivity, emphasize the importance of the personal, vulnerable and intimate in research, and focus on what a deeper understanding of lived experience can teach us about our world.

Take a few minutes to check out the new Centre for Creative-Relational Inquiry out of the University of Edinburgh’s School of Health in Social Science.

Kat McNichol is the Co-Editor for the Journal of Integrated Studies and the Editor-in-Chief of Dreamers Creative Writing. She is also a Director of Marketing-Communications at a high-tech company in Waterloo and has spent the past 12+ years writing marketing copy for the high-tech industry. She holds a B.A. in English Literature, and an MAIS in Writing and New Media, and Literary Studies.