Gerry has a busted face. We could all see it coming, standing at the bottom of the hill, looking up at him hurtling down on his snow saucer. Sam says he dared Gerry to get down in less than ten seconds. Gerry won the bet. “We need to get you to the hospital,” Morley says, “so my dad can sew you up, you’re a mess.” Gerry asks who else wants to put money on the table.

He passes his hand over his face, and startles at the blood running red from his fingers. Gerry has that boldness about him, like guys at the pool hall who won’t back down from anybody.  But he pays for it. His face already has white scars on it, and you can see lumps on his arm where he broke it. Once he took out a knife, and started to cut my finger, “So that we can be blood brothers.” No way. I pushed him off.

I think Gerry joined a gang, though we’re only twelve. He said, “We fight with bicycle chains,” like he was bragging.

Morley and I pull him towards the road, and he lets us, I don’t know why. “Where’s your good sense?” I want to ask, but don’t.

We own the hill this winter. We’ve been out on it fifty times, all day long. My mother says we’ll never get the winter blahs, we’ll just beat them to death. I tell the guys this and maybe exaggerate it a bit-for the laughs, you know. Usually we’re just up and down the hill, trees rushing by, feet out to steer, screams echoing around us. Sam is the only one with a proper toboggan. All shiny and new, you can almost see your face in the light grey metal. Gerry tells us to warn everybody when he hurtles down on his saucer. “I can’t control it, it goes where it wants.” This scares me silly.

We get Gerry to the hospital, and the nurses sit him down and clean his face. One of them, Mrs. Thomlinson, leans back, her hands on her hips, her head angled to the right, peering at Gerry.

“What’s the matter with you?” she asks him. She’s got that white nurse’s cap on her short, black, curly hair.

“Yes, there is,” she says. Taking all these risks, hurting yourself, scaring your friends.”

“So, when are you going to start thinking before you jump into things?” She says it like she doesn’t believe it’s ever going to happen.

Morley and I look at each other. His father could come in any moment to sew Gerry up. He won’t put up with Gerry’s talk and his lip.

“Oh yah?” says Dr. Roberts. “What is it this time?” he says to Gerry, putting his fingers on Gerry’s ruined face and probing around.

Gerry winces, and pulls his head back. He looks at the Doc as if he can’t believe what he’s doing. Gerry lifts his own hands up to his cheeks, only to have the Doc push them down. Gerry glares at him with those pale blue eyes. He’s a fighter, and I hold my breath, hoping he doesn’t lash out. To my surprise, he tears up and hangs his head so that the Doc has to lift it back up. “Stay still,” he says. In Gerry, this is different, like a mad dog you can’t believe is standing down. “Good boy,” says the Doc.” “We’ll have this fixed up in a minute.”

“Do we have to tell my parents?” Gerry asks in a squeaky voice I’ve never heard before. I look at the Doc, curious what he’s going to say. He exchanges an odd look with one of the nurses.

Gerry shrugs, and shifts in his chair, so that one of the nurses has to place a hand on his shoulder, stilling him. Then it hits me that I’ve seen this part of Gerry before. One time, in the schoolyard, he was throwing snowballs like the rest of us. The principal happened to come out as Gerry and I threw at each other, hard. The principal stamped his feet, and yelled for anybody that he saw throwing to come to his office. Gerry and I owned up and took the strap, both of us trying not to show the pain. When it was done Gerry asked the same question of the principal. Makes you wonder.

“Let’s get out of here,” says Gerry, after he’s all sewn up.

“OK, let’s go to my house, we can take shots, and get some hot chocolate.”

I can’t help stopping for a minute, wondering what Gerry’s scared of. Then Morley distracts me, singing and humming the way he does. I wish I’d asked him.

We get to my place, take some shots, and go in for a drink. My mother looks at Gerry with that look she gets when she can’t decide whether to blast you or understand you. She sighs, shakes her head, and sits us down for hot chocolate. She keeps watching Gerry though, until he feels it, and turns to her. He speaks to her in a quiet voice. I know he likes her.

“What are you looking at?” he asks her. Mom has this face that always tells you what she’s feeling. She’s worried now.

Gerry looks at her with a funny smile on his face. Suddenly, I know what’s coming.

“Sure,” he says. “Just trying to crush the winter blahs.”

For just a second, I can see my mom trying to believe him. Then she walks over and gives him a tight hug and says, “You need more hugs, Gerry.” 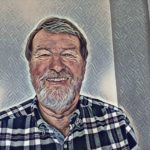 About the Author of Gerry’s Ride – Alan MacLeod

Alan MacLeod is a writer and psychologist living in Bruce County where his family emigrated in 1852. He belongs to writers groups which inspires and encourages, but his top reader is his wife Barbara. He feels honoured to be published in Dreamers, which is a journal of heart and soul.–

Check out more stories like “Gerry’s Ride” by Alan MacLeod: