I googled myself the other day.

There’s a writing retreat coming up later this year that I want to attend but it has an application process that requires I submit a list of my past publications. I was compiling this list and I didn’t want to forget anything, so I googled my name.

I was surprised to learn I was a semi-finalist for the Ontario Writers Conference Story Starters Contest, but I had no idea! They announced the list of semi-finalists in March 2017.

A few seconds after finding out I was a semi-finalist, I learned I didn’t win – so, excitement followed by disappointment in the span of a few seconds!

Every month, the Ontario Writers Conference posts a piece of art by a local artist. Writers then take inspiration from that art piece to write and submit a short story or poem of 100 words or less. Semi-finalists, finalists and a winner are selected from among the hundreds of submissions received over a year’s time.

My piece is called “Crow vs. Raven” submitted in response to art by Gretel Boose: 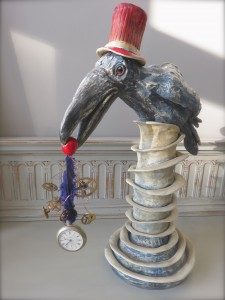 “What’s that supposed to mean,” you snarl, but out of habit more than anything. It’s how we talk to each other now.

“That raven right there, the one that’s not a crow, right?” you say smugly.

Kat McNichol is the Co-Editor for the Journal of Integrated Studies and the Editor-in-Chief of Dreamers Creative Writing. She is also a Director of Marketing-Communications in Waterloo and has spent the past 12+ years writing marketing copy for the high-tech industry. She holds a B.A. in English Literature, and an MAIS in Writing and New Media, and Literary Studies and she is currently completing a PhD in Career Writing at Tilburg University.

Check out the flash fiction story, “The Librarian.”

Do you write flash fiction? Check out 5 Places to Submit Flash Fiction in Canada.