My knitting needles are made of plastic, bamboo, and metal. Different materials for different yarns – the metal and plastic slide through fibre easily, the bamboo offers a hint of resistance, perfect for slippery silks and cottons. 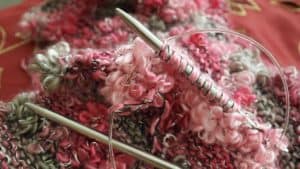 Years of practice mean my hands know what to do the moment they grasp the needles. I find the yarn’s tail, then ease the tip of the right needle through the first stitch on the left. As I wrap the yarn behind from below, my needle deftly flicks the tip back through, birthing a new stitch. The old one shuffles off its mortal coil as I move to the next. On and on down the line like a conveyor belt, each stitch moving closer to the moment of transformation, part of a greater whole. My needles can bear the enormous weight of all that change. They tell me right away if I have judged incorrectly and missed the stitch’s entry point. If I try too hard to force them I am punished with lumps, bumps, and incomplete patterns. I relax my hands and remember that, when we work together, we know what to do. They guide me to the right place without fail, and slip in easily with a sigh. “Yes,” they tell me, “this is where we belong.” This is where I belong too. 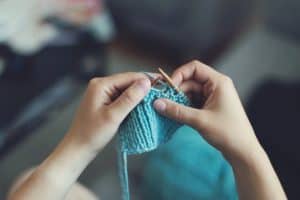 When I was small I watched my grandmother knit. She was never without her needles and yarn, fingers moving impossibly quickly with mesmerizing results. She taught me to knit when I was old enough. My first project was an unintentionally undulating scarf. At times it was so tight I could barely force the needle through the stitch. Then, suddenly, the scarf would shift, the stitches ridiculously loose, falling off the ends of the needles. Back and forth it went in this pattern of extremes as I attempted to sort out the rhythm. It was horrendous, but I had made something out of (almost) nothing.

I fell out with knitting about the same time my childlike adoration of my grandmother was replaced with eye-rolling and attitude. My teenage concerns were with fitting in, being cool, and finding a boyfriend, not yarn and needles. My grandmother’s knitting looked, to my teenage eyes, terribly homemade, an aesthetic I did not covet. If it couldn’t be bought in a store, I wasn’t interested. Her animal creations I had once begged for now seemed odd and lumpy, and, embarrassingly, stuffed with plastic grocery bags (my Oma, like many immigrants who had lost everything, was thrifty). Through those years of distance and attitude my grandmother remained steadfast, knitting quietly and continuing to love me; her adoration never wavered.

In my early twenties I found my way back to the needles and they spoke their truth to me. “We belong together,” they said. They were right. It took time to get good at knitting. I knit the same hat in different incarnations for a year. But slowly I moved beyond the basics, beyond the beginning. I can read my knitting now, and other knitting too. I speak the secret unspoken language of knits and purls, short rows, and yarn overs with my fellow devotees. Sometimes we meet at knitting events, sharing and learning from each other. We may focus on patterns and technique, but just as often the knitting occurs behind the scenes as we talk about movies and books, our families, vacation plans, and restaurant recommendations, all the while our fingers flying. Sometimes we’re strangers with needles, waiting for our kids at swimming lessons, or traveling on the bus, and we silently appreciate each other’s work. Together we worship the mighty sheep, our needles relics for communion. The appeal of yarn and needles may vary for each of us: a quiet place to relax, a series of evolving mental puzzles, the physical manifestation of accomplishment, or a sense of community. Flying fingers can soothe a psyche, quiet the mind’s chatter, help wipe clean the canvas of the day.

When I was pregnant with my first daughter I turned my knitting attention to her. Tiny hats, brief sweaters, impossible booties. I would cover her in my knitted love when my body no longer enclosed her. My grandmother died the day after she was born, the fog of new motherhood making the loss hard for me to comprehend. That Christmas my small girl received a baby blanket, the squares of which had been knitted by my grandmother before she died. Even into her nineties, and after her eyesight had betrayed her, my grandmother’s hands were skilled, the stitches even and strong. I added the blanket to the woolly love that encircled my girl. There was enough of it to embrace me too. 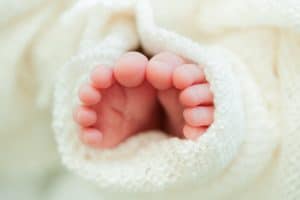 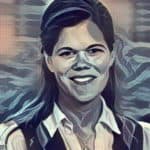 Amy Neufeld has studied English Literature and Theatre Arts, and previously worked as an actor. She has now moved off-stage, and works as a drama teacher, producer, director, and playwright for young audiences. In addition to writing plays, Amy also dabbles in fiction and creative non-fiction. Her writing has appeared in See Magazine (now defunct), and she was a finalist in CBC’s inaugural Canada Writes competition. She loves Canadian novels, memoirs written by funny ladies, libraries, knitting, and drinking Earl Grey tea. Amy lives in Kitchener, Ontario with her husband, two young daughters, and calico cat. Find her on Twitter @AmyRNeufeld.

Did you like this non-fiction story, “The Needles,” by Amy Neufeld? Read more non-fiction on Dreamers Creative Writing.