The study of therapeutic writing, also known as writing for wellness, expressive writing and developmental creative writing, has only lately arisen as a significant area of study. Despite it’s late arrival, research in the field quickly demonstrated that writing has positive health benefits (Pennebaker 164; Baikie and Wilhelm 338; Pennebaker and Chung 417); as a result, interest in therapeutic writing is increasing rapidly.

Research done with people who have learning disabilities, with the goal of “developing verbal, intellectual and imaginative skills,” has been shown to facilitate “self-expression in participants” (Sampson 69).

People who undertake a therapeutic writing practice experience emotional improvements in their sense of self, and an increase in their overall confidence. In Frances Driscoll and The Rape Poems, the author of The Rape Poems finds healing by writing about the trauma she experienced and her readers find healing by reading about experiences similar to their own.

In Poetry in Prison Part 1 and Part 2, creative writing and personal development take the form of self-expression through writing, and the gaining of meaning from that expression of self. “Like much human endeavor, writing poetry is about personal growth, having faith in yourself, setting a goal and realizing a sense of accomplishment in achieving that goal, whether it is to write one poem or publish dozens” (Otis 62).

These examples, and ones of writing with dementia patients (Killick), as well as writing done by people who are seriously ill, both physically (Nix; Rickett) and mentally (Hartill), as well as writing done by people who have learning disabilities (Sampson), show many common elements: self-engagement and self-understanding; gaining a deeper understanding of thoughts and emotions; offering an outlet – a constructive activity that develops self-confidence and feelings of self-worth; a chance to “re-story” the past to gain new perspectives (Lengelle 4); an opportunity for self-forgiveness; an opportunity for self-analysis; and finally, conscious, self-reflexive efforts towards personal growth (Hunt, Transformative Learning 66; Nicholls 174).

Arthur Bochner, in his article It’s about Time: Narrative and the Divided Self, writes about an epiphany he had following the death of his father, which brought the division between his personal and his professional/academic life into sharp focus. He says, “this is the work of self-narration: to make a life that seems to be falling apart come together again, by retelling and ‘restorying’ the events of one’s life” (Bochner 429). 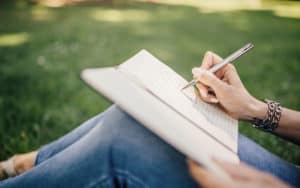 “Who Am I? Writing to Find Myself” is available to read online in the Journal of Arts and Humanities:
http://www.theartsjournal.org/index.php/site/article/view/990/499

“Becoming the Self: Personal Development in the Context of Therapeutic/Transformational Writing” is available to read online in the Journal of Integrated Studies: http://jis.athabascau.ca/index.php/jis/article/view/228/405

Looyeh, Majid Yoosefi, Khosrow Kamali and Roya Shafieian. “An Exploratory Study of the Effectiveness of Group Narrative Therapy on the School Behavior of Girls With Attention-Deficit/Hyperactivity Symptoms.” Archives of Psychiatric Nursing (2012): 404-410. Online.